Today the EPA announced that it would be granting $9 million to 3 universities and the Water Environment Research Foundation to research solutions to nutrient pollution. Stormwater runoff, which has been in the news frequently in the past few weeks (at least in the Chesapeake Bay watershed regions) will be a major focus. One of the schools awarded funds is Pennsylvania State University. Their research will concentrate on Pennsylvania waters and the Chesapeake basin.

This entry was posted in Nitrogen, Phosphorus and tagged Stormwater Runoff.

The Potomac River was partially frozen over today, here in Northern Virginia.

The Chesapeake Bay Program (CBP) has released their final draft of the Bay Watershed Agreement. The agreement is a result of a partnership between states and the District of Columbia, in the Chesapeake watershed, to protect and restore the Bay. A draft report is published every January detailing goals and expected outcomes for the year to come. CBP allows for public comment from now until March 17.

I’ve posted the link to the 2014 Farm Bill as passed by the House of Representatives (titled the Agricultural Act of 2014).

This entry was posted in Policy and tagged Agriculture.

I’m looking forward to hearing more about the Farm Bill which is up for vote tomorrow:

This entry was posted in Policy and tagged Agriculture.

A Snowy Weekend on the Creek

It was a snowy, cold weekend in the Northern Neck. Antipoison Creek and our tidal ponds partially froze over Sunday morning. My family was there to take some photos: 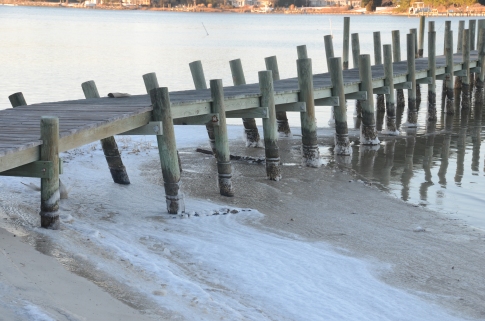 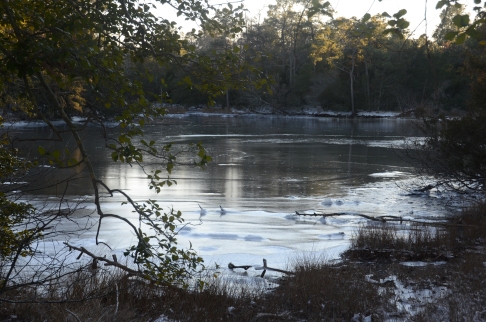 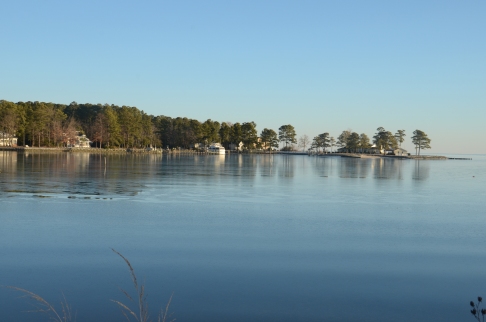 I’m reading a variety of Bay/ environmental news this afternoon:

This past weekend I attended the Grasses for the Masses workshop hosted by the Chesapeake Bay Foundation. I received celery seeds and a kit to plant these seeds in my home. I spent the afternoon setting up:

First I found an area in my basement for the project. The kit includes a large black tub, three smaller trays where the seeds will be planted, a water heater, filter and thermometer. I placed the lamps on the sides to provide light for the seeds. 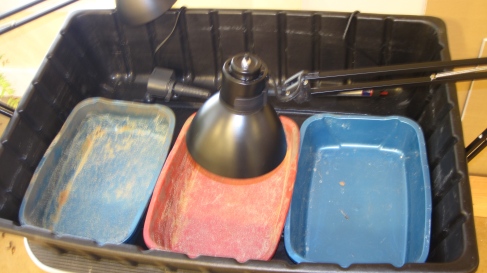 The next step will be to fill the black tub up with water, set up the pump and filter. The water needs to heat up and bubble for 24 hours before the seeds can go in. I’ll use the thermometer to make sure the water reaches 78 degrees F, then I’ll plant the grass seeds in the trays.

The celery seeds came in a plastic bag, with a little bit of water, and have been sitting in my fridge since the weekend (pictured below). When the water in the tub is ready, I’ll spread sand and the seeds down in the three smaller trays. Aired water and a sand-soil mixture will go over top.

Over the next 2.5-3 months I’ll be monitoring seed growth and water temperature, cleaning out the filter and filling the tub with water. By the end of 10 or 12 weeks I should have grasses ready for planting. I’ll be posting updates as the weeks go by.

I heard a piece this morning on NPR on a recent IUCN – the International Union for Conservation of Nature- report on sharks and rays. (NPR). According to the piece, 25% of the world’s sharks and rays are threatened by extinction. This got me thinking about the Chesapeake Bay. I know we have had sharks and rays in the Bay, but I wasn’t sure about their status. What I found was pretty interesting, and fitting, given my piece yesterday on oyster farming:

In the Bay we have the the cownose ray (species name Rhinoptera bonasus). The ray lives in Chesapeake waters from May to October, feeding on molluscs, like oysters and clams.

A 2011 report in the Chesapeake Bay Foundation’s Save the Bay magazine comments on the negative impact rays have on the oyster and seagrass populations in the Bay, (p. 15). Seagrasses and the oyster industry have seen a bit of a comeback after decades of trouble. To protect this growing industry, many in aquaculture called for the ray to be fished or killed off in large numbers.

The 2011 report, “Misunderstood: The Cownose Ray” hazards against overfishing the ray. The species is native to the Chesapeake, and plays an important role in the natural ecosystem. Sometimes the role of a species is not completely understood until it is no longer there to perform it. The article mentions an approach on the West Coast where the aquaculture industry targeted rays to protect their farms. The rays were in fact eating other oyster predators, and when the ray numbers went down, so too did the oyster population.

Scientists argued for more natural solutions to the problem in the Chesapeake region. They called for better management of ray predators (native sharks), the use of oyster cages and other forms of repellent to prevent ray feeding. By touring my neighbors oyster farm, I’ve seen that oysters are grown in cages, perhaps in part because of the ray issue. But I’m curious to find out more- on the ray population today and the species current interaction with aquaculture and underwater grasses. Has anything changed, improved? I’ll be looking for more information in the next few days and sharing what I find.

Last spring I worked on a report on the impacts of oyster acidification on the Eastern Oyster (Crassostrea virginica) population in the Chesapeake Bay. To get some background information on the oyster growing process, I visited with a neighbor who harvests oysters for consumption on Antipoison Creek. I wanted to share some pictures and my understanding of the oyster farming process from that project.

Farmer Mike grows over 40,000 oysters, off of his shore and dock, and further out, in the creek and Chesapeake Bay. Mike buys oyster larvae from a nursery outside Mathews, Virginia. The nursery produces Dermo-disease resistant triploid oysters. (A good story on the creation of triploids, and their differences from diploid oysters is here: Chesapeake Quarterly).

The larvae are raised in tanks, like the empty one above. When larvae attach themselves to a hard surface, which they must do to grow, they are called spat. Many farmers use a spat-on-shell approach; spat grow on oyster shells until they form their own shell, and are large enough to be moved. (Spat are less than 0.98 inches long; it can take up to a year for oysters to reach this size).

The oysters are then moved to a net or strainer, shown above. Mike keeps the strainers in floats, suspended in the creek and attached to his dock. 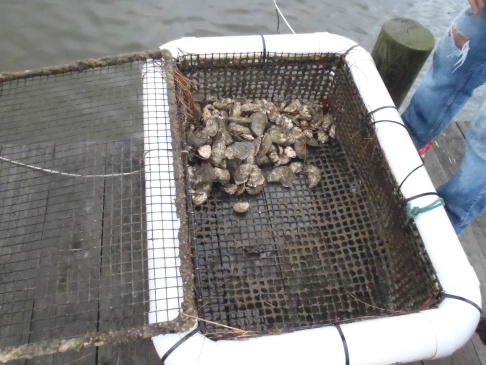 As the oysters grow, they are moved to larger cages, placed on the bed of the creek, and further out in the Bay. Separating oysters into cages at this stage reduces overcrowding and competition for food. It generally takes 2.5 – 5 years for an oyster to grow to market size ( 3 inches or longer). At this time, the oysters are collected, transported, and sold to local restaurants and markets.

Other interesting facts about the oyster farming process:

Raising oysters requires a great deal of care throughout the year. I found a site on cage handling and maintenance that has seasonal instructions for raising oysters, and additional info on the farming process. (Severn River Association).

This entry was posted in Oysters, Virginia and tagged Agriculture, Virginia Oyster Industry.