Dead zones and algal blooms tend to be especially bad in the Bay over the summer months. Dead zones are areas where excess nutrients in the water- nitrogen and phosphorus runoff from human activity- create oxygen depleted underwater areas, where fish and other aquatic organisms find it difficult to survive. Algal blooms occur in waters with excess nutrients. The blooms block sunlight to submerged aquatic vegetation. Underwater grasses cannot grow and survive in these conditions, and cannot provide food or shelter for a number of reliant species.

Scientists predicted in June that there would be an above-average dead zone in the Chesapeake Bay this summer. There is good and bad news on that front. In July, the Bay’s dead zone was the smallest recorded in 30 years, according to the Capital Gazette. Hurricane Arthur and cooler than average temperatures in July were likely the main factors. However, it is predicted that this trend will not last through August. Warmer temperatures, and the spread of algal blooms already spotted in the Bay and its tributaries will lead to more serious conditions later this summer.

-Researchers at William and Mary, and the Virginia Institute of Marine Science (VIMS), are working on an algae biofuel initiative, which harvests algae as fuel, and takes up excess algae and nutrients in the water that create dead zones and harmful blooms. There is an interesting article in the Biomass Magazine, which goes into more detail on this project.

–The Chesapeake Bay Program recently published a photo essay that documents how researchers at the University of Maryland Center for Environmental Science (UMCES) record dead zones in the Bay. UMCES uses a research vessel to go out to the deepest parts of the Bay and perform a number of tests, including the measurement of dissolved oxygen levels.

This entry was posted in Nitrogen, Phosphorus.

In Virginia there is a Blue Crab Industry Panel, a group of 15 commercial watermen, that provides input on crabbing and relevant regulations to the Virginia Marine Resources Commission (VMRC). Given the current depleted state of crabs in the Chesapeake, this panel of watermen is calling on the VMRC to impose stronger regulations on the culling of blue crabs, then the agency passed earlier this summer.

The VMRC cut limits for the culling of blue crabs by 10% in June, and instituted these changes for all commercial crabbers. The Virginia Blue Crab Industry Panel wants the VMRC to impose individual harvest limits for crabbers, rather than enforce regulations based on seasons or daily catches. In addition, the panel calls on the VMRC to put forward more scientific information on natural threats to crabs and recreational crab harvests. The panel wants the agency to institute a more efficient reporting system to increase accountability for crab harvests, and calls for an economic analysis looking at the costs and benefits of current regulations, and any that may be enacted in the near future.

According to a press release issued by the Virginia Blue Crab Industry Panel, these recommendations mirror management plans that allowed rockfish to return to sustainable levels in the Bay, and focuses on long-term solutions to the crab population problem, rather than short-term “Band-Aid fixes.”

The press release can be found at Vacrabbers.com, and their full proposal here: Virginia Blue Crab Industry Panel Priority Recommendations 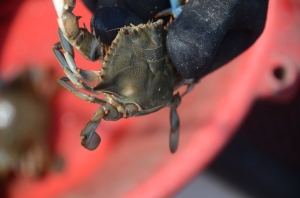 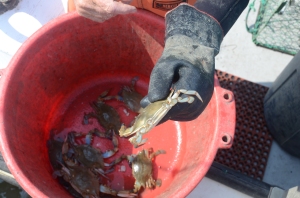 This entry was posted in Blue Crabs, Policy, Virginia.

Early last month I started growing oysters off of the dock at the house on Antipoison Creek. The oysters came out as seed from Oyster Seed Holdings, LLC, a hatchery on Gwynn’s Island, Virginia, and were raised by a third party, Oyster Mama’s Bay-Bies, until they reached the size of a quarter. I have 300 oysters growing in a bag inside of an oyster float off of the dock. The oysters will stay in the bag until they grow big enough to float in the cage by themselves.

Oyster gardening is pretty low maintenance. The cage and bag need to come out of the water every week or two to be cleaned. The cage needs to be checked just as often to make sure no predators, like blue crabs, are inside, eating the oysters.

The oysters will go dormant over the late fall and winter as the water temperatures drop. This batch will be ready for eating hopefully by early next fall, when they grow to be at least 3 inches long. (I have triploid oysters, which usually reach maturity in 18 to 24 months.) Until then, the oysters are doing their part to clean the Chesapeake Bay- each one filters up to 50 gallons of water a day! 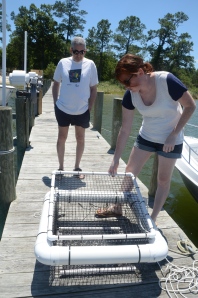 This entry was posted in Oysters and tagged Chesapeake Bay, Oyster Garden, Virginia.