Earlier this summer, I reported on estimates that the Bay hypoxic zone would be smaller than average this year. The Maryland Department of Natural Resources (DNR) has just released their data for dissolved oxygen levels for July and early August in the main stem of the Bay (see this report). While the hypoxic area in August was about average, July measurements exceeded estimates.

Earlier estimates, made by a team of scientists from UMCES, the University of Michigan, NOAA and USGS, were calculated from spring rainfall and nutrient loading data from major Bay tributaries, such as the Susquehanna and Potomac Rivers. Spring rainfall, which carries nutrient runoff into the main stem of the Bay, is a major indicator of how big or small dead zones may be later in the year.

Measurements of dissolved oxygen are then taken throughout the summer months. Data is collected by the DNR, and compared to long-term averages (1985-2015). 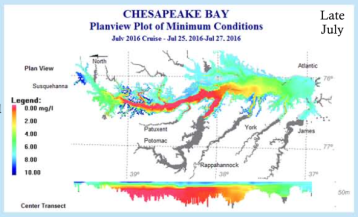 July dissolved oxygen levels, and the subsequent hypoxic zone area, were higher than average. The hypoxic zone grew to 1.65 cubic miles last month, which was the seventh largest hypoxic zone on record in the Bay. (The July long-term average is 1.29 cubic miles). Early August levels were closer to estimates; the August 2016 (Aug 8-10) hypoxic zone measured 1.15 cubic miles, compared to the 1.13 cubic mile average.

Dissolved oxygen is measured with various other water quality indicators, which can give scientists a better idea of what causes average or above average dead zones. This year, scientists measured higher salinity in the Bay in June through early August. Higher salinity is indicative of less rainfall and less nutrient runoff. In wetter years, more nutrient runoff usually results in larger hypoxic zones. The results for early August confirm spring estimates. With the drier spring we had this year, we would expect to see average or lower than average dissolved oxygen levels, hypoxic zone areas, and salinity measurements.

But what about July? Why was the hypoxic zone so much larger than average? Other environmental factors, such as temperature, were likely to blame. July temperatures were especially high last month. Warmer air and water temperatures result in stagnant waters; oxygen on the Bay surface is unable to mix with bottom waters, where species such blue crabs, oysters, and finfish can be found.

Monitoring of the Bay hypoxic zone concludes in September. Check back for an update in a few weeks when the late August/ early September data is released.

This entry was posted in Uncategorized and tagged dead zone, hypoxic zone.